Dare I say we are fools if we don't believe in Genealogy Synchronicity?

Last week, I had an experience that can definitely be described as Genealogy Synchronicity!

Back in 2011, I wrote about discovering the obituaries and death records for Nellie Welch Tibbetts and her husband, Frank Tibbetts. Nellie was the sister of my great grandmother, Mary (Minnie) Welch Kelly. I had discovered photographs of the home where Nellie and Frank lived in a photo album that belonged to my great grandmother.

I've made several trips THROUGH St. Joseph, Mo in the last two years. It wasn't until last week that I spent an entire day in St. Joe and my last stop of the day was a "drive by" to finally see the Tibbetts home.

As I pulled over to park my car, I saw that the house is currently For Sale! 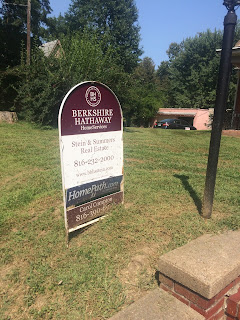 This was exciting to me, as it meant I would be able to take some photographs without the current owner wondering what the heck I was doing there! 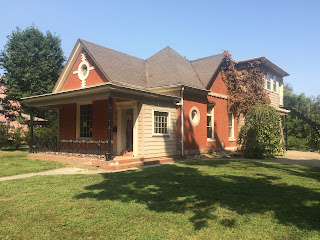 I walked around the property, taking a few exterior photos, when, after a few minutes, a young man exited the front entrance and said Hello!

He happened to be the realtor for the property and he had just arrived at the location!

I brought up the photos of the house, including members of my family, to show him, on my smartphone. Yeah, he was pretty impressed! He told me the house was a foreclosure. And I was able to enter the property to look around. 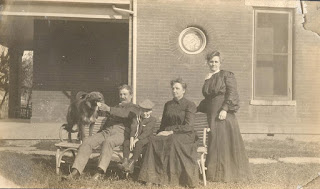 Here's a photo from Minnie Welch Kelly's photo album taken at the house. I believe the women to be Nellie Welch Tibbetts and her sister, Agnes Welch Garrigus. The "porthole" window at the house is a good indication of where the photograph was taken. 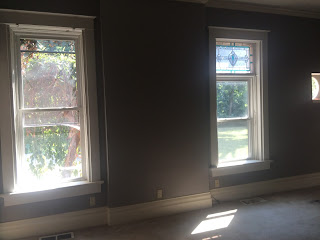 This photograph is taken from the interior of the house. The windows match up with the photographs in Minnie Welch Kelly's photo album. 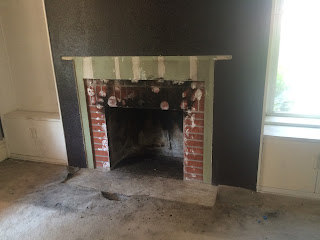 Here's the fireplace inside, which is probably original to the house. 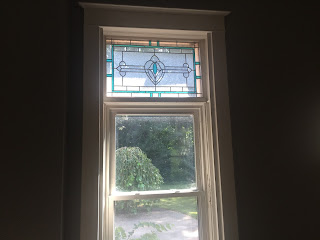 This is one of the windows looking to the South. My speculation is that the "stained glass" is not original to the home. 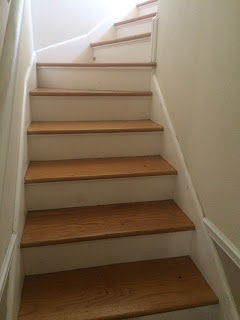 These are the stairs to the upper floor of the house. They do not appear to be the original finishing, but quite possibly were there when the Tibbetts lived here. 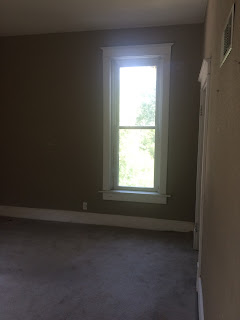 This is one of the windows, facing South. Quite likely original as seen in the photos in Minnie Kelly's photo album.

As the house is currently vacant, I feel it is acceptable to post the current "for sale" information on the property. The asking price is $63,000.The photos on the real estate site show a home that looks much better than it does "in real life."

For me, I'm just glad that I made the decision to stop by when I did. How often do you really get to look inside a house where your family lived???