The second day of the Midwest Family History Expo in Kearney, Nebraska was less hectic and more relaxing for me. My first stop was the conference bookstore. I wasn't the least bit surprised to see Ruby Coleman and Robbi Ryan there. You always know where you can find fellow book people in between sessions!

I opted to attend Ruby's class on Nebraska: A Research Journey. Each time I hear Ruby speak, my admiration for her knowledge grows and grows.If you are doing any kind of research in Nebraska, you must have Ruby's book, Genealogical Research in Nebraska. I thought I knew quite a bit about Nebraska, but clearly, after listening to Ruby, I need to dig out a few more history books and do some more cramming! I did not know that Nebraska towns going west were named in alphabetical order as the railroad moved west. How did this significant piece of information escape me all these years?!?! And my ancestors were railroad contractors in this state!

My only choice for the next session was about Ancestry.com for advanced users. This room was already overflowing with standing room only as soon as the previous session was over. The syllabus materials were extensive, so I figured I could wing that on my own and opted for a leisurely solo lunch when I was able to get caught up a bit on reading the genealogy blogs.

Not wanting to get aced out for a seat in my next session by James Tanner, Getting Started with Heritage Quest Online, I arrived early. This room was nearly full and James was explaining and demonstrating FamilySearch. Interesting because the topic for the earlier presentation was blogging! People went and got their lunch and brought it back to the meeting room to soak up his knowledge. This is a man who gives and gives and gives. He gives the people what they want and he was willing to keep talking and demonstrating as long as people wanted to listen. He kept speaking through the entire lunch break!

I had used Heritage Quest sporadically in the past, but after learning more about it from James, I'm willing to go back and give it another shot. This resource is available via most libraries with your library card. For Nebraskans, you can access this resource with your driver's license number on the NebraskaAccess government web site.

James' next session was about cloud computing. I was glad that he mentioned that it would not be a "how to" of Dropbox, Evernote and Skype, but more of an overview of how to use the cloud for genealogy.

That was the sign for me to call it a day and begin the trip back to Lincoln. I already was on information overload about all of the new resources I want to check in to. I'd already touched based with the friends I've made from previous conferences and our social networking online. I was perfectly satisfied with my conference experience.

And the good news is that Family History Expos will be coming back to Kearney in 2013. So mark the weekend after Labor Day on your calendar and plan to attend.

The link for this post is http://longlostrelatives-smp.blogspot.com/2012/09/midwest-family-history-expo-day-2.html
Posted by Susan Petersen at 9:45 AM 4 comments:

Family History Expos brought its Midwest conference to Kearney, Nebraska for the first time this weekend. Did you know that Kearney is smack dab in the middle of the United States? It's half way between the East and West coasts of our country. Perhaps that's why I find it amusing when people refer to Ohio as being in the Midwest! 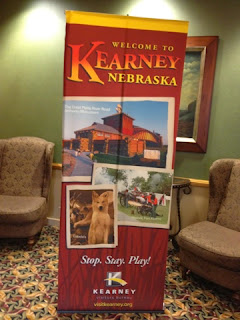 About 300 people are attending the Expo. They came not only from Nebraska, but Kansas, Iowa, Colorado, Wyoming, Arizona, Utah and many other states. Now that I've attended several local, state and regional conferences, it's fun to recognize people and meet up with my genealogy friends.

Nebraska's own Ruby Coleman kicked off the event with a heartwarming keynote. If you didn't know Ruby before, you got to know her well during her talk. I can now say I know someone who has waded through a pig sty and an old outhouse in search of family history. Ruby admitted she's willing to get down and dirty in search of her ancestors!

On Friday, I attended a session on Irish research. I realized I had attended this session in Kansas City two years ago. Clearly, I needed the refresher course as there were many web sites presented that I need to revisit.

Ruby gave a wonderful talk on death records with a lot of tips I hadn't considered. Have you ever thought about tracking down pallbearers to interview them about your ancestor?

I knew that I wanted to get to at least a couple of James Tanner's sessions. He is the author of the Genealogy's Star blog. The blog is aptly named as James is truly a genealogy star! His talk on archives and repositories was very helpful as he shared web sites and demonstrated how to find the buried treasures that won't come up in a Google search.

It was great fun to meet up with my genealogy friends from Lincoln and Omaha, and get to meet several new people who I hope to get to know better. We sat there with our smartphones friending one another on Facebook!

I also had fun tweeting highlights of the sessions I attended and following the speaker notes in the syllabus I had previously downloaded to my Kindle Fire. That made it easy to view and bookmark the web sites the speakers were talking about.

I saw a lot more laptops and computers in the audience being used for note taking than I had seen in the past. It's clear that technology plays a vital role in today's genealogy conferences.

This is the first time I've used my iPhone to compose a blog post, so once I'm back on a computer, I'll add some hyperlinks to this content. For now, I'm getting ready for another full day of learning.

The link to this post is http://longlostrelatives-smp.blogspot.com/2012/09/midwest-family-history-expo-day-1.html
Posted by Susan Petersen at 6:43 AM 2 comments: