Over the last several weeks, I've been so busy browsing and indexing 1940 Census records and doing volunteer work (is that an oxymoron?) for the Lincoln-Lancaster County Genealogical Society (LLCGS), that I haven't checked in at Ancestry.com.


During a bout of insomnia the other night, I was checking out the Ancestry.com app on my new iPhone (yes, I finally got with it and now wonder why I dragged my feet about upgrading). By following the shaking leaves and some hints, I discovered a much expanded database of U. S. City Directories covering the period 1821 - 1989.


For me, the beta version of this database and image set is a goldmine of information that may end up distracting me from indexing for a few days. My focus has been Nebraska city directories which are available for the following cities: Beatrice, Columbus, Fremont, Hastings, Kearney, Lexington, Lincoln, Norfolk, North Platte, Omaha, Scottsbluff and York.


The Omaha directories go back as far as 1866 and go through 1959. Of course, not every year is there, nor is every directory complete. But, there's enough of a selection that if your ancestors lived in Omaha, the odds of locating them are quite good.


Lincoln's directories range from 1883 to 1960. I've located my grandparents in several directories from the 1930s, 1940s and 1950s. I found my Dad living with his parents in 1947, having returned from World War II and now in the work force. I found Mom living in Lincoln in 1947 as a young single working woman. I checked out her two best friends from Greenwood and, as I expected, the trio of girls were roommates living at 1936 D Street. This was shortly before my parents were married in 1947. Dad recalled the girls living in a third floor apartment as that's where Mom lived when she and Dad began dating.


This photograph of my parents was probably taken outside of Mom's apartment building. The tower in the background is First Plymouth Church, which is located at 20th and D Streets in Lincoln.


I also discovered my grandmother, Sina Bellinger, living with her brother Clifford and their parents, John and Emma, in Lincoln in 1910. Sina's brother, Harry Bellinger, was trackable in the Omaha City Directories for several years, when he was a fireman for the railroad, then later when he became a railroad engineer.


The Fitzgerald kin make several appearances in the Lincoln directories. John Fitzgerald's entry almost reads like a resume, with a long list of all of his businesses and affiliations. One of his sons, William Paul Fitzgerald, lived in Denver during the 1940s and 1950s. I was able to locate several entries for him as well. I'm still missing evidence of his death, but the city directories helped me move his life forward several more years.

I'm still on the hunt for Margaret Kelly Langdon, the sister of my great grandfather, Daniel Kelly. I've tracked her to about 1918 in Kansas City, when she was living with one of their brothers. I'm hopeful that a couple entries I've discovered for her will end up being a match.

Regarding the database, it is very easy to search and end up with some pretty accurate results. You can search the entire database or narrow it by location. I've discovered that many of the street addresses have been transcribed incorrectly in the database. In nearly all of the examples I've found, the first digit of the street address is missing. However, the images are clear and it's easy to make a correction to the transcribed index.

Search Ancestry'com's City Directories database - I'd love to hear what gems you find!

Nebraska State Conference is May 4-5

There's still time to plan to attend the annual conference of the Nebraska State Genealogical Society that will be held May 4 - 5, 2012 in Grand Island.

The featured speaker is Laura Prescott. Her sessions are:


Other speakers will be:
Registration fee for one day is $50/day or both days for $85 (includes lunch both Friday and Saturday).

I hope to see you there!

The news is out by now. The 1940 Census images were released on April 2, 2012. Due to time constraints, I wasn't able to do very much searching for my ancestors until this weekend. It has been quite an interesting journey with much more to come.

Since my Mom's family lived in a small town, Greenwood, Cass, Nebraska, I assumed they would be easy to locate in the census. I checked every page of the Greenwood village census and they weren't there. Knowing the family had lived in Omaha for a while in the 1940s, I thought they might be there. I wasn't quite ready to tackle a city of that size just yet, especially without an address.

I knew where my Dad's family lived in 1940, so using the tools at SteveMorse.org, I started looking for the Petersens in Lincoln, Lancaster, Nebraska. Can it get any easier than this? I found him on Page 6 (of 56!) living with his parents and his younger sister.


This photograph of Dad and his younger sister, Shirley, was probably taken around the time of this census. Their Grandma Pecht died in 1941, so I think that's a pretty good estimate.

In the census, it looks like my grandfather, Otto W. Petersen, provided the information. He said that his wife, Ruby, was born in Nebraska, but all other documents indicate she was born in Kansas, just across the border from Hardy, Nebraska, where many in my family lived for decades (and still do).

I couldn't decipher the handwriting for Otto's occupation, but Dad picked it out clearly, "Fuel Foreman." We both agreed on the "Steam Railroad" part of this data item.

As I shared the census images with Dad, he started yelling out names of their neighbors for me to look up. I couldn't keep up with him! I found several and will definitely go back for a closer look. It was one of those unplanned moments when I wasn't prepared to start jotting down notes as he reminisced about the old neighborhood.

After my success in finding the Petersen family, I had to turn my attention back to the Kellys and see if I could find Mom's family in Cass County. After browsing the list of districts, "Salt Creek" jumped out at me as I knew I had seen "Salt Creek Precinct" on many other documents related to my Cass County kin.

Without much of an effort, I found my grandparents, William and Sina Kelly, their son, "William Leroy Kelly, Jr" ("Jiggs") and my Mom, Patricia. In 60 years, I've never heard anyone refer to Jiggs as William, Bill or Leroy, so it's interesting that he is listed as LeRoy in the 1940 census. The two oldest daughters, Margaret and Helen ("Jerry") had moved out of the house by this time. Grandpa Kelly was a farm laborer. His family had been huge landholders and raised stocked until the Depression, so it would appear he may have been working for someone else as most of the family's land and assets were long gone by this time.

As I read through the list of names of the people in Greenwood in the three Enumeration Districts, it was a very eerie feeling. I came across other relatives who I never knew other than by their name, as they had died before I was born. I recognized the names of the Landon family, my Sunday School teacher, the janitor from the school I attended from kindergarten through fifth grade. Most of those names I see only when I go to visit the Greenwood Cemetery.

The families in Greenwood had been there for at least three generations in 1940. My Mom's contemporaries were the parents of the kids I went to grade school with. Even though I was young, apparently I had a pretty good memory for people and their names, even if I'm not able to place a face to many of them.

These census records are some that I will go through several more times. I found Grandpa Kelly's brother, Paul and his wife, Elsie. And there was Grandpa Kelly's mother, Mary (Welch) Kelly, living with her other son, Francis. Her husband, Dan Kelly, had just died in February of 1940. After celebrating 50 years of marriage, she had to have been going through some transitions when the census taker came around.

I've since located my Dad's great grandparents, Jens and Caroline Petersen, in Hardy, Nuckolls, Nebraska, but I haven't found his other grandmother, Clara Pecht, pictured above, who was living in Beatrice, Gage, Nebraska in 1940. My other great grandparents, John and Emma Bellinger, were dead by this time.

Now comes the part of putting the stories together to go along with the records.

Posted by Susan Petersen at 6:31 PM No comments:

The Nebraska Access web site has published the 1940 telephone white pages for several Nebraska cities. Having trouble finding your kin in those census images? These books with street addresses should help narrow down that search. I've already spotted at least half a dozen long lost relatives in these pages.

This project was made possible by the collaborative efforts of the Omaha Public Library, the Lincoln Public Library and the Nebraska State Historical Society.

Email ThisBlogThis!Share to TwitterShare to FacebookShare to Pinterest
Labels: 1940 Census 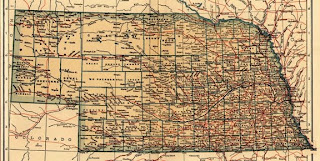 It may be April Fool's Day, but it's no joke that there is no shortage of genealogy events to choose from in Nebraska. With Spring here and Summer on the way, it is definitely genealogy conference season.

Highlights for April include the Greater Omaha Genealogical Society's spring conference featuring Roger Minert on April 28, 2012 in Omaha. Also on April 28 is a workshop on Gravestone Symbolism with Beth Santore in Lincoln. Links to these events appear below.

Coming up on May 4 - 5 is the annual conference of the Nebraska State Genealogical Society. This year's event will be at the Midtown Holiday Inn in Grand Island. Featured speaker is Laura Prescott.

While you're at it, be sure to mark your calendar for the fall conference of the Lincoln-Lancaster County Genealogical Society which features Hank Z. Jones. Jr. This will be October 12 - 13, 2012 in Lincoln.

Be sure to check the Calendar of Events for other activities for 2012. If you have an event to add to the list, please email me.

Posted by Susan Petersen at 10:26 AM No comments: