Born at Litchfield, Conn., she had resided in St. Joseph since 1885. She was a member of St. Joseph Cathedral.

Survivors include her husband, Frank L. Tibbetts, of the home, and a sister, Mrs. Agnes Garrigus, haddone [sic], Conn.

The body is at the Heaton-Bowman mortuary where the parish rosary will be recited this evening at 7:30. Services will be tomorrow morning at 10 at St. Joseph's Cathedral with the Rev. Patrick Tobin officiating. Burial will be in Mount Olivet cemetery.


The back story - a brief case study

I found this obituary online last evening while looking for something else. Nellie and Agnes were sisters of my great grandmother, Minnie Welch Kelly. These daughters of Mark Welch and Sarah Conneally were on my mind after writing about Minnie Welch's autograph book in the Fearless Females series.

From time to time, I will go back to an online resource and repeat a search, since new information is added to the internet daily. Last evening, I went to the Google News Archive and typed in "Agnes Garrigus." Her name showed up in a 1956 obituary from the St. Joseph News Press in Missouri. I knew there was a family connection in St. Joseph, but did not know who it was.

The obituary, posted above, indicated that Nellie Tibbetts was a sister of Agnes Garrigus. Nellie Welch!

As mentioned in the article about her sister Minnie's autograph book, I also have the autograph book that belonged to Nellie Welch. I didn't know if she had remained in Connecticut or if she had moved to the Midwest, either with Minnie or later. Now I knew that Nellie had moved to St. Joseph, Missouri and I had her married name!

My next step was to enter the information about Nellie and her husband, Frank L. Tibbetts, into my Ancestry.com tree. It was there that I found them in the census records for 1900, 1910, 1920, 1930. There were never any children listed in their household, but Frank's father, John Tibbetts, lived with them as he grew older.

One of the best pieces of information discovered on Ancestry was the couple's marriage license from the Missouri marriage records database. The couple was married in St. Joseph on September 20, 1893. This was five years after her sister, Minnie, married my great grandfather, Daniel Kelly, in Nebraska.

Since Nellie and Frank lived in Missouri, my next step was the Missouri Digital Heritage site. This is a wonderful online resource, especially if your Missouri ancestor died in the state between 1910 - 1960. Images of death certificates are available on the site.

I searched for Tibbetts and found Frank's death certificate, but not Nellie's. Frank died just 11 months after his wife died. I tried searching under various spelling variations of Tibbetts to locate Nellie's death certificate with no results. Then I searched by her first name only. There I found her, with her last name recorded as Tibbets.

Her last name was spelled incorrectly on the death certificate, but her husband's name (the informant) was spelled correctly.

My next step was to visit FindAGrave to see if there were memorials for the couple at Mt. Olivet Cemetery. Being none, I created them and posted a request for photographs of their headstones.

Perhaps you've had a photograph, a newspaper article or a document gnaw at you. It's providing you with a little information, but not everything that you want to know. There are several photographs in Minnie Welch Kelly's photograph album that show people in front of a brick home in St. Joseph, Missouri around 1905. The address of the home is written on at least one of the photographs.

The house still exists today, I learned from doing a search on Google Street View a couple years ago. While driving home after the Family History Expo in Kansas City last summer, I even considered doing a drive-by of the house, but I didn't.

Here is a cropped photograph of the Tibbetts home in St. Joseph, Missouri. I am not posting the address since the home is still occupied.

The address written on the photograph matches the address of Frank and Nellie Tibbetts in the census records.

Even in the early 1900s, I thought this appeared to be a beautiful home, made of brick, with intricate detail in the masonry. 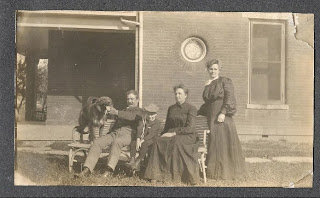 Oh, to be able to identify all of the people in the photograph. I've deduced that the young boy is Alfred Clarence Garrigus, since he is identified in other photographs and wearing the same clothing.

I can only speculate that the women are the Welch sisters. The gentleman - perhaps this is Frank Tibbetts? Or perhaps it's Mr. Garrigus.

Based on newspaper articles and Minnie's photo album, I've learned that the Garrigus family made a trip to the St. Louis World's Fair in 1904 and likely visited Agnes' sisters in St. Joseph, Missouri and Greenwood, Nebraska on the same trip.

As I looked over the census records for the Tibbetts and also discovered Frank's entry in several city directories for St. Joseph, why was I not the least bit surprised that both Frank and his father were brick masons! There was something about this beautiful brick house that had been gnawing at me for a long time. I just never came across any photographs of family homes that were anything but frame. So for the Tibbetts to live in this beautiful brick home made complete sense.

I'm sure this research saga will continue because I still want to be able to make positive identifications of all of the people who were photographed in front of the home in St. Joseph.

Will I make that side trip to see the home on my return trip from the Family History Expo this summer? What do you think?
Posted by Susan Petersen at 8:10 AM